Republican Sue Googe’s quixotic campaign to unseat Congressman David Price in an overwhelmingly Democratic 4th Congressional District has built a superficially compelling narrative but close scrutiny reveals holes clearly visible in the light of public information. “Let me Google that for you”.

Googe is registered to vote at an address in the 4th District where she does not appear to live. Congressional candidates are not required by law to live in the district they hope to represent, but it helps. Jiangxiu “Sue” Fu Googe has been a Cary resident since 2004 when she and her husband bought a 2,400 SF home in a desirable Lochmere development. It was located in the 13th District when Sue Googe filed to run in the 4th Congressional District and it is currently located in the 2nd District.

END_OF_DOCUMENT_TOKEN_TO_BE_REPLACED

NC Supreme Court Justice Paul Newby made a contribution to a joint candidate committee for four Wake County Republican candidates for county commissioner. The contribution may have violated a section of the NC Code of Judicial Conduct which limits the political activity of judges. The joint candidate committee is called United 4 Wake and campaign filings show that contributions are to be allocated equally, with each candidate, Paul Coble, Rich Gianni, Phil Matthews and Joe Bryan to receive 25%. Newby made a donation 9/20/2014 of $150. A 3/24/2014 memo from the NC Judicial Standards Commission in advance of the campaign season provided information regarding permissible and prohibited political conduct.
END_OF_DOCUMENT_TOKEN_TO_BE_REPLACED

Gary Pendleton’s illegal campaign signs around Raleigh are the least of his problems. Pendleton, running for NC State House District 49 against Kim Hanchette has used a facsimile of legislative letterhead to solicit votes in apparent violation of Legislative Ethics Guidelines. Pendleton is a relatively new incumbent, having been appointed 8/18/2014 to the seat made vacant by the death of Jim Fulghum. Official legislative stationery or mailing privileges may not be used to solicit votes and, according to a recipient of such a letter, it did not contain a required clear disclaimer stating that the stationery was not printed or mailed at State expense. 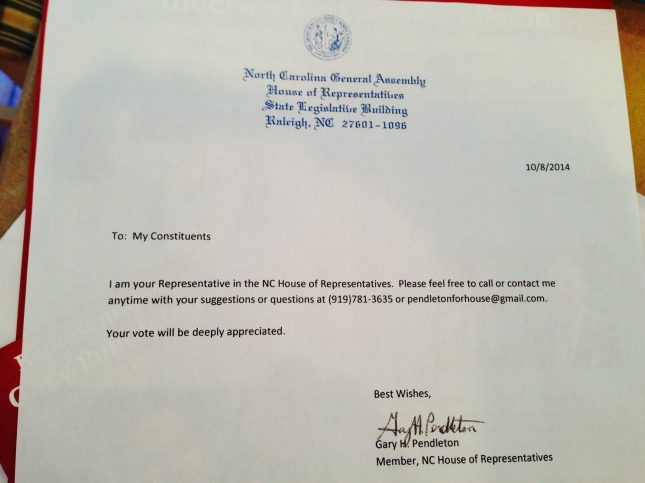 END_OF_DOCUMENT_TOKEN_TO_BE_REPLACED

Republican Tom Murry, in an expensive campaign to hold on to his NC House District 41 seat against an effective challenge by Democrat Gale Adcock, appears to have stretched military rules and distorted limited experience in order to solicit votes. Murry’s campaign has been making extensive use of web ads, including Facebook promoted posts. One such ad on Facebook, showing Murry in military uniform, appears to occupy the boundaries of military rules on political activity.

Murry apparently joined the NC Army National Guard in June as a Judge Advocate General (JAG), just 4 months ago, and is now using his uniform in a campaign ad. Military rules allow the use of certain photographs in uniform in campaign literature, which accurately reflect actual performance of duty, and with a specific disclaimer, in the context of other non-military biographical information but not as the “primary graphic representation” as Murry has appeared to have done with his web ad on Facebook.
END_OF_DOCUMENT_TOKEN_TO_BE_REPLACED

When Chad Barefoot quit his day job as Skip Stam’s assistant to run for a custom-made State Senate seat, he landed on his feet with a job at the political consulting firm of connected Republican Frank Williams. Campaign finance records show that about that time Stam’s campaign committee started paying a regular fee of $4,333.33 for “campaign consulting” to Williams’ firm Pioneer Strategies spaced about every month until Barefoot was elected. Beginning January 2012 there were 10 payments of $4,333.22 and one final payment of $8,666.66 on 10/17/12 for a total of $51,999.99. Barefoot’s campaign had the help of a lot of direct and indirect money, as thoroughly detailed by the Independent weekly, and he was elected that November.

Campaign finance records don’t show that the veteran politician Stam had ever hired Pioneer Strategies before 2012, or after, or that he ever paid such sums for “campaign consulting”. The closest that Stam’s records show is a one-time $4,200 in 2006 to JN Dollar for “mail service” and several payments totaling about $10,000 in 2000 to JN Dollar for “radio ads”. In addition there was one 2012 payment $1,500 to Pioneer Strategies for “website redesign”. You’d have thought that $52,000 for “campaign consulting” might include a website design, especially as Skip Stam is more likely to be giving campaign advice than receiving it. The coincidence of payments may not amount to a smoking gun, but there’s enough bad optics to raise eyebrows more than shot of botox could.
END_OF_DOCUMENT_TOKEN_TO_BE_REPLACED

Campaign committees of Paul Coble have been claiming an apparently non-existent degree as one of his qualifications since as early as 2011 when he first ran for Congress. Coble’s current campaign website for Wake County Commissioner claims he “earned a RHU (Registered Health Underwriter) degree from Northeastern University in 1992”. The Northeastern University Registrar’s office could find no record of Paul Coble as a student, nor of a Registered Health Underwriter degree program at the university:

“We are not having any luck finding information about the student or the program.”

END_OF_DOCUMENT_TOKEN_TO_BE_REPLACED

The campaign committee of Tom Murry, NC House District 41, received a $2,000 check from J Michael Caldwell of South Carolina, listed as “President” of a company simply stated as “Gateway”, on 1/29/2013, one day before the North Carolina State House reconvened (after a 1/9/2013 organizational session). On the same day, 1/29/2013, the campaign committee of Tim Moffitt, NC House District 116, received a $2,000 check from Bobby Mosley of South Carolina, listed only as “Principal” with no employer notation. Caldwell is Mosley’s son-in-law and together they ran a gambling enterprise spanning multiple corporate entities and over 600 internet cafes in multiple states.

On 8/14/2013 an indictment was entered in federal court in South Carolina naming J Michael Caldwell, Bobby Mosley, Sr., Gateway Systems, LLC, Gateway Gaming, LLC, Frontier Software Systems, LLC and Frontier Gaming, Inc, as defendants on one count of conducting an illegal gambling business and one count of money laundering related to the alleged illegal gambling. It has been described as “the biggest gambling ring bust in South Carolina history.”
END_OF_DOCUMENT_TOKEN_TO_BE_REPLACED